DF Nigerian is run by Godshelter Oluwalogbon and his wife Bisola. Godshelter, who was born in Ghana and grew up in Nigeria, immigrated to the US in 2001 at the age of 25. While working various restaurant gigs, he started catering for members of his church, in East New York, Brooklyn. After ten years of catering, he started selling meals out of the back of his car outside the Nigerian embassy in midtown.  Two years ago, he opened DF Nigerian food truck, and recently signed a lease on a restaurant.

Adel’s No. 1 is owned by Adel El Nagar, who immigrated to the US from his native Egypt in 2000, after a career in sales that took him to Iraq, Saudi Arabia, and through the Middle East. After working on a cart near the famous Halal Guys on Sixth Avenue, he developed his own cart downtown, catering largely to the limousine drivers who would line up outside the former Goldman Sachs building on Front Street in Lower Manhattan. Adel lives in East Elmhurst with his wife and four children.

Big Brother’s Delicious Food is run by Ji Chen “Peter” Wang, who was a chef in Kaifeng, China – famous for its night market — before moving to the US in 2012.  He settled in Queens with his family before opening a small Chinese restaurant and then a food cart, selling Chinese-style barbecue skewers on Main Street in downtown Flushing.  He now has two carts, which he operate alongside his son and nieces and nephews.

Yolanda’s Tamales is owned by Maria Palacio, who was born in Guerrero Mexico and immigrated to the US when she was 23. After working a short time in a supermarket, she opened up the first tamale cart on Upper Broadway, using recipes taught by her grandmother, Yolanda. She set up near 137th Street, where her tamales became famous among City College students, and has since moved up to 145th Street.

mm
Anton’s Dumplings specializes in pelmeni, which are Russian-style dumplings wrapped in thin, unleaven dough. It was founded by Anton Yelyashkevich, who immigrated to the US from Belarus in 1996, with his family, at the age of 6. He grew up in Bensonhurst, went to art school, worked in advertising and then founded his cart in 2015 near the basketball courts on West Fourth Street. After a glowing write-up in the NY Times, business took off, and he is now looking for a permit to expand his business. 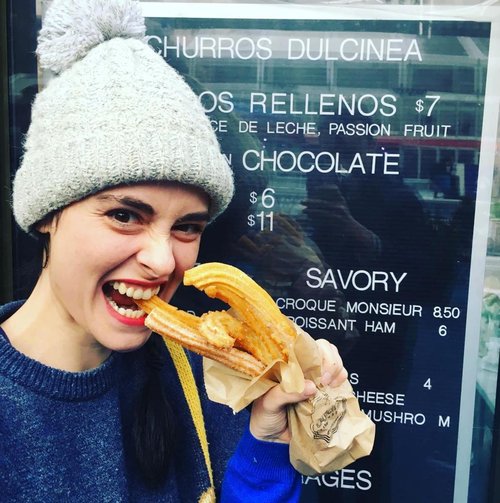 Dulcinea is the creation of physicist Pati Sanz, a native of Spain who got inspired during a vacation to New York and returned to bring the churreria experience of Madrid to her new city.  Dulcinea has become known for filling its churros with flavors like Nutella, passion fruit, and dulce de leche, and for its inventive “churro ice cream sandwich.” Dulcinea can be found at Smorgasburg, DeKalb Market, other markets across the city, and on Instagram. 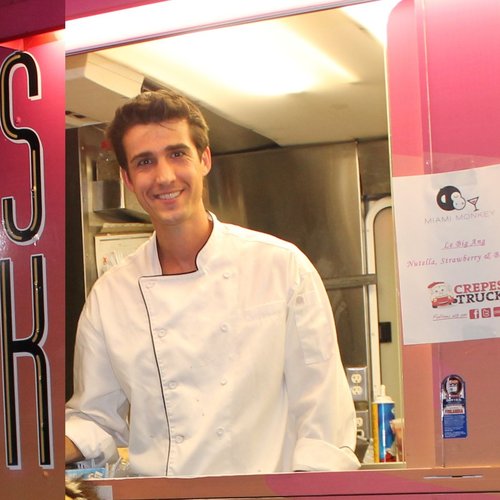 The Crepes Truck is owned by Stephen Asaro, a second-generation vendor whose dad, an immigrant from Sicily, operated a Mr. Softee truck in Woodside Queens when Stephen was growing up.  After college and a series of jobs in the food sector, Stephen bought a vintage 1959 ice cream truck and opened it as the Crepes Truck in 2006. He now owns four trucks and is looking for brick-and-mortar locations to expand his business. Visit him on Twitterand Facebook. 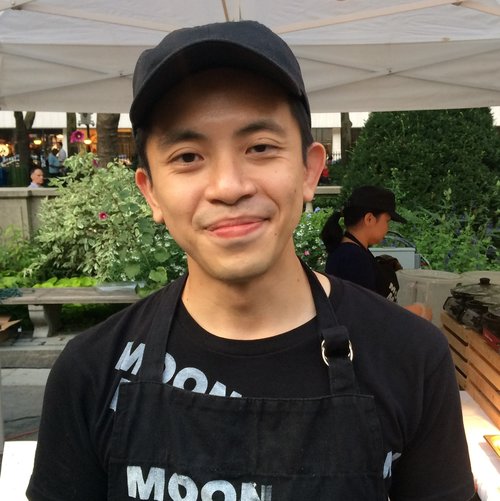 Moon Man was founded by Nigel Sielegar (l) and Wenny Purnomo, cousins who grew up in Indonesia.  Wenny, an experienced restaurant operator, and Nigel, an award-winning designer, teamed up to showcase “kue pancong”, a type of coconut pancake that is slowly disappearing from the streets of Indonesia. They use 10 different toppings including Indonesian pandan steam cake (kue putu), ginger honey lemongrass, and cassava balls at their stand at Queens Night Market. Find them on Facebook and Instagram. 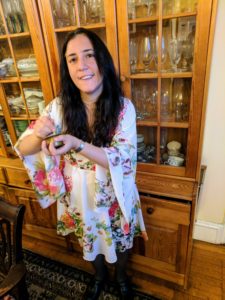 Sweet Zahra is the brainchild of husband and wife duo Zahra and Conroy Lee. Zahra was born in Tehran, Iran, where she learned how to bake from her grandmother, Farokh. After immigrating to the US, and working in corporate America for a few years, Zahra enrolled at the Institute of Culinary Education (ICE) work-study program, earning her diploma and certificate in baking and pastry arts. She worked at Amy’s Bread and Nobu, among other places, before launching Sweet Zahra at Queens Night Market this summer. 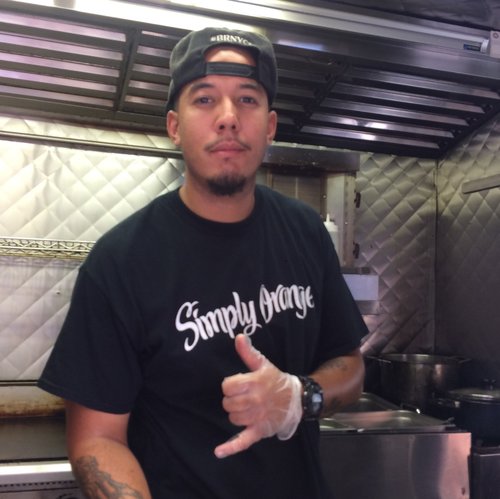 Rich Cruz was born and raised of Dominican and Puerto Rican heritage in Park Slope, Brooklyn. After finishing school, he worked at a series of restaurant and catering jobs and then learned the mobile food business at a series of food trucks — including Vendy finalists Gorilla Cheese, Nuchas, and Sweet Chili — before rolling out Born & Raised this year. He dreams of one day owning a rooftop lounge overlooking the Brooklyn Bridge. Check him out on Instagram. 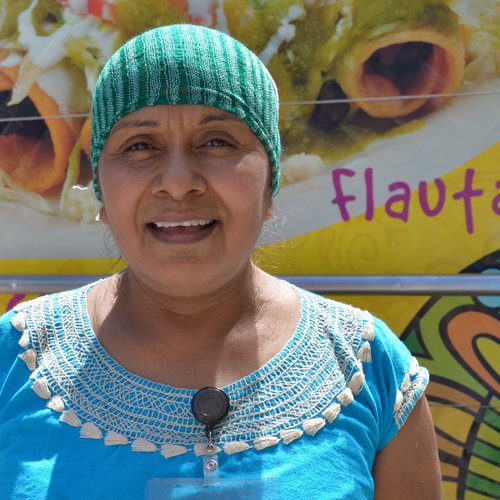 El Rey de Sabor is owned by Ofelia Cardoso, an immigrant from Puebla, Mexico who first got her start selling churros out of a shopping cart in the Bronx. She teamed up with her brother, Vilio, twenty years ago to buy a shish kabob cart and repurpose it to sell Mexican food, first in East Midtown, where she now has two carts, and now also in Lower Manhattan, on Greenwich Street. She was a Vendy Cup finalist in 2010. 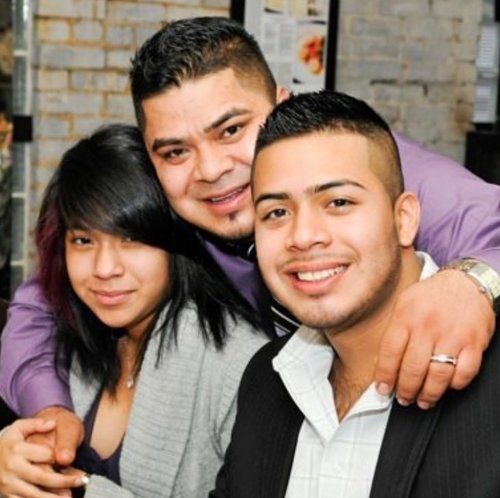 El Toro Rojo was founded by Gabriel Apreza, an immigrant from Guerrero, Mexico, and his son, Dennis. Over twenty years, living and raising a family in Long Island City, Gabriel worked his way up from deli worker to a manager at a supermarket. Three years ago, inspired by the movie Chef, he teamed up with his son Dennis – a manager at a bakery — to painstakingly build and then launch their food truck. They can usually be found in Midtown for lunch, and in LIC in the evening. Or on Facebook and Instagram. 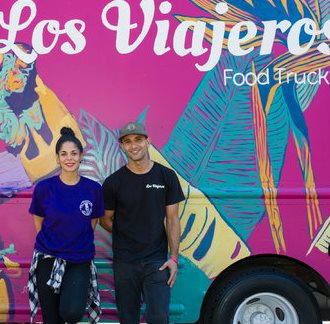 Los Viajeros (“the Travelers”) was founded in 2015 by Carlos Dacosta and Caitlyn Napolitano, who live in Inwood. Carlos, who immigrated to the US from the Dominican Republic when he was 8, works as a firefighter in the Bronx. Caitlyn, with years of experience working in restaurants, manages the day-to-day business. Their specialty is their ropa vieja taco, using a recipe from Carlos’ grandmother that combines Cuban, Dominican and Mexican cultures and is as popular in the Flatiron District as at Jacobi Medical Center in the Bronx. You can find also them on Facebook, Twitter, and Instagram. 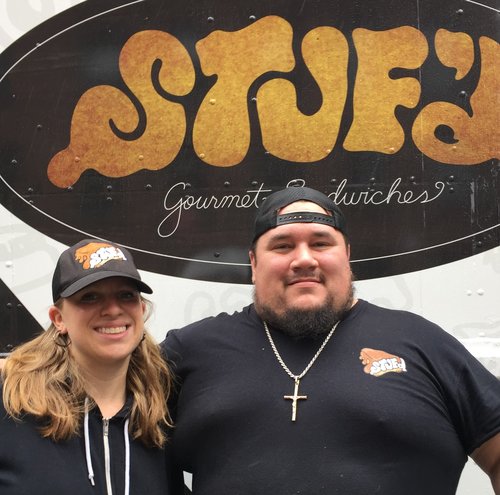 Stuf’d is owned by Rebecca Mitchel and her business partner, chef John LoCascio, who met when they were working at a restaurant in Lower Manhattan. Rebecca, from Rockland County, went to NYU to study hospitality and business, always knowing she wanted to run her own food business. John, from an Italian family in Queens, had worked as a chef in a series of pizzerias and other kitchens. In 2016, they teamed up to serve gourmet French toast sandwiches, with homemade bread, a savory egg wash and panko breadcrumbs. You can find them on Tuesdays at the Dumbo Food Truck Lot, or on Facebook or Instagram. 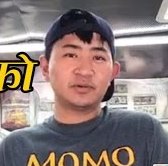 Momo Delight (formerly Momo Bros) was founded in 2016 by Psang Thinlay, a Tibetan refugee who grew up in Nepal and immigrated to the US in 2008 at the age of 15. After finishing high school in Jackson Heights, he worked in a series of Japanese restaurants before launching Momo Bros cart, located at 73rd Street and Broadway in Queens outside his uncle’s shop. Momo Delight specializes in the jhol momo, a traditional Nepalese soup momo that is otherwise hard to find in NYC.  They are on Facebook, Instagram and Twitter. 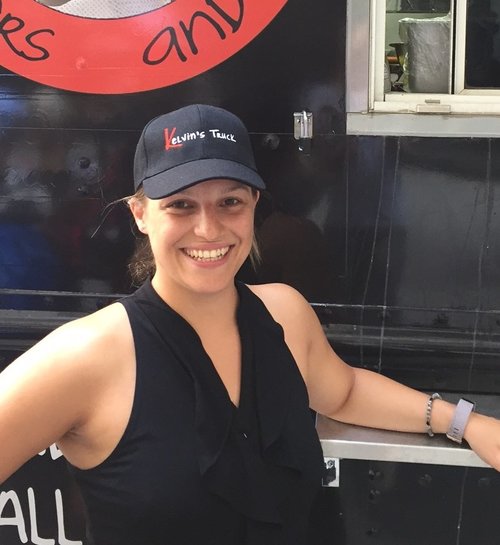 Kelvin’s is owned by Renis and Inka Fusha, who met at Renis’ German restaurant in Astoria, where Inka was a loyal customer homesick for foods from her native Germany. After getting married, they decided to bring their German fare to the street and opened Kelvin’s Truck, named after their six-year-old son. Since April, 2017 they have parked at various locations in Manhattan and LIC with their signature sausages and burgers. They are on Facebook, Instagram and Twitter. 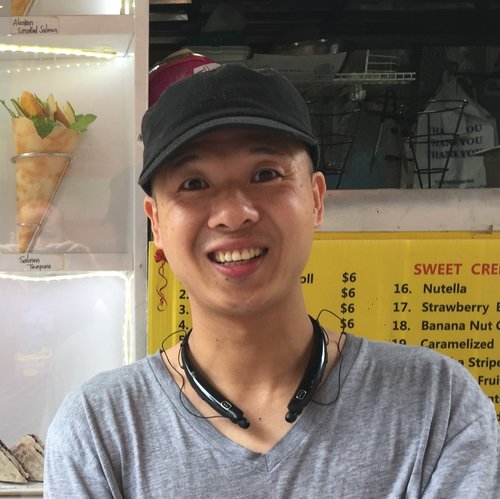 Harajuku Sushi and Crepe is owned by Aaron Chun, originally from Fujian, China. Aaron spent 17 years working in sushi restaurants before opening the Harajuku Sushi and Crepe food truck in January, 2017. Aaron’s sushi has a special twist as it is made only with black or “forbidden” rice which, traditionally was only served to the Chinese Emperor and famous for its healthy characteristics. Aaron serves his sushi with Japanese-influenced sweet and savory crepes which are as beautiful as they are delicious. Follow him on Twitter and Instagram. 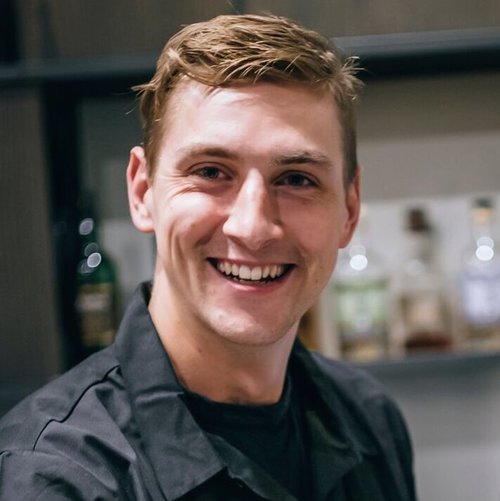 Warung Roadside was born in May 2017 when chef/owner Trevor Lombaer, inspired by his travels in Southeast Asia, converted a used hot dog cart into an operation serving Bangkok street food and Thai BBQ.  A warung is an Indonesian roadside stall that serves as an essential part of daily life, much like a corner bodega. Trevor started in the backyard of his favorite neighborhood bar in Bed Stuy and has expanded out to all sorts of hot spots from pop-up fashion events to major festivals like Electric Zoo. Check him out on Facebook. 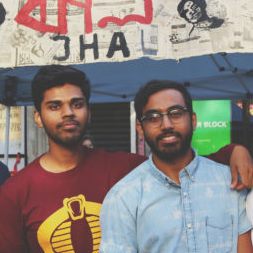 Jhal NYC is a collaboration of two cousins who grew up in Queens Village — Mahfuzul Islam and Alvi Zaman. Jhal employs Bangladeshi immigrant women, mostly stay-at-home mothers, to build community, combat social isolation, and put them on the path toward higher education.  Jhal seeks to popularize Bengali street food and foster pride in Bengali history and culture. While selling at several markets, Jhal in expanding its catering business, with the hopes of opening a food truck soon. Find them on Facebook and Twitter. 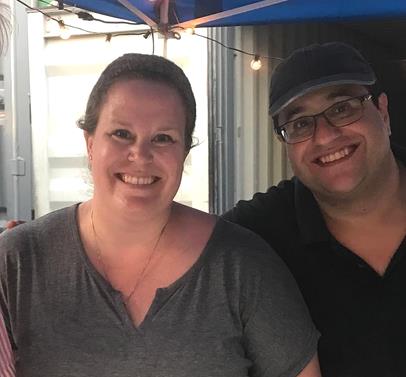 Joon (a term of endearment in Farsi) is the lovechild of Jessica Spiegel and Amir Alerasoul of the Upper West Side. Jessica, an architect from Florida, met Amir, an investment analyst originally from Tehran, eight years ago. Last year, during a trip to Amir’s homeland, they cemented their plan to start their Persian food stand at the Queens Night Market.  They are hoping to make up for the relative lack of Persian food in NYC by teaming up tahdig (crispy rice) with savory stews. Follow them on Facebook and Instagram. 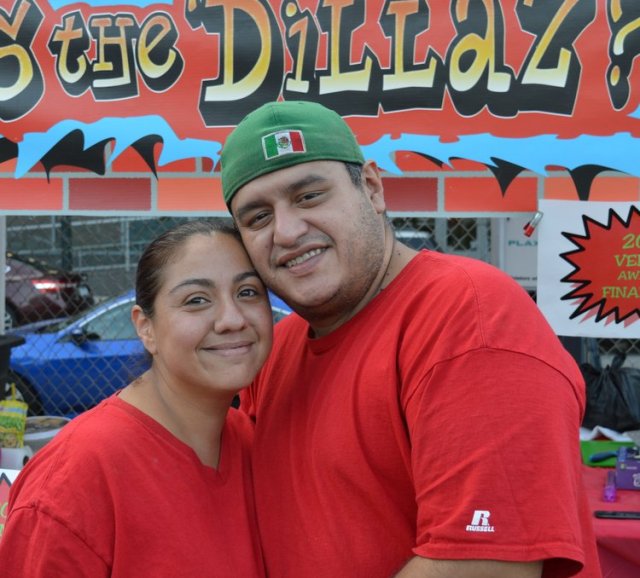 What’s the Dillaz is the husband-and-wife team of Jesse Vasquez and Marilyn Hernandez, both born and raised in LIC, Queens. Jesse went to culinary school and now works as a chef at Mom’s Kitchen & Bar in Astoria. Marilyn is a paralegal who is combining her love of the law with entrepreneurship.  Their Reuben quesadilla – and other specialties – have been a hit since they started selling, along with their two young daughters, as LIC Flea last summer.  They are on Instagram and Facebook. 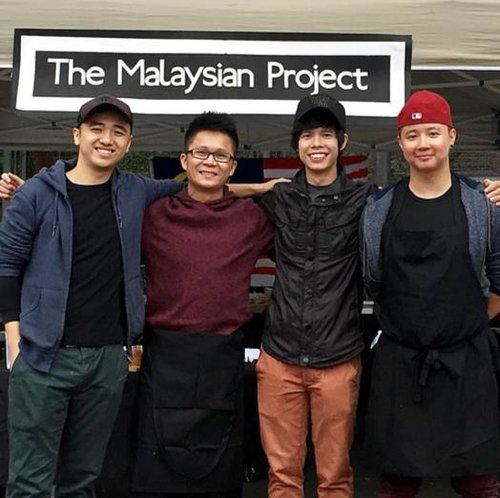 The Malaysian Project is made up of four friends who all live in Middle Village, Queens. Calvin, Abraham, Carlos and Bryan all went to culinary school together near Kuala Lumpur, Malaysia. They reunited years later in New York and, in 2016, decided to launch the Malaysian Project, profiling the tastes of their homeland.  Following their debut last year at Vendy Plaza, they are at Queens Night Market, winning raves for their Malaysian-style hamburger. Check them out on Instagram. 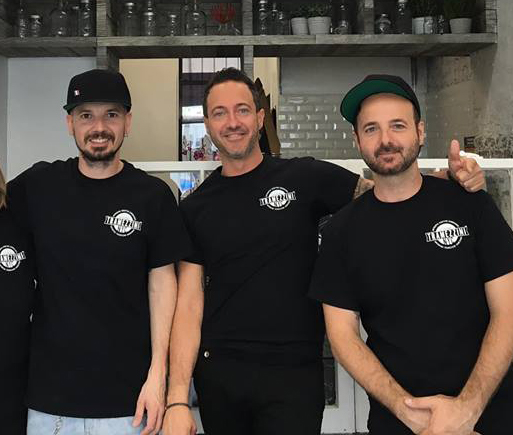 Tramezzini NYC was founded by two brothers from Venice, Italy – Filippo and Massimiliano Paccagnella, who teamed up in 2016 with their friend Davide Pedon to bring to the US traditional cone-shaped sandwiches using soft, crustless bread imported directly from Venice and high-quality ingredients. After getting their start at Smorgasburg, the team recently opened a brick-and-mortar on East Houston Street. You can also visit them on Instagram, Twitter and Facebook.