Brooklyn Book Festival – can’t-miss events
Brooklyn has long been considered a hub of the literary world, and the Brooklyn Book Festival, taking over Borough Hall this Sunday, further confirms that. With tons of events, amNewYork (Scott Rosenberg) has picked out eight you should check out at the FREE festival. Here are just four:

Politics, War, Love and Streetlife
Join Elizabeth Gaffney (“When the World Was Young”), Rashidah Ismaili (“Autobiography of the Lower East Side”) and Sam Roberts (“The History of New York City in 101 Objects”) as they discuss New York City from the 1940s-60s. (11 a.m., St. Francis McArdle)

Sondheim Unplugged
A celebrated New York event since 2010, the Broadway World & Bistro Award-winning series Sondheim Unplugged features some of Broadway and cabaret’s most dynamic voices, accompanied by piano only. Expect tunes from A Little Night Music, Company, Into the Woods, Follies, Passion, Dick Tracy and more.

Past special guests have included original Sondheim cast members such as Len Cariou, Victoria Mallory, Donna McKechnie & Chip Zien – so you never know who might drop in. Sondheim Unplugged is hosted by series creator Phil Geoffrey Bond, who will fill the audience in on Sondheimien facts, history & assorted tidbits of theatrical lore!
Come join the party!
54 Below, 254 W. 54th St. (btw Broadway/8th ave)
7PM / $35-$70, with a $25 minimum.
646-476-3551 / 54below.com

“This annual hornucopia shines a light on new works by or for trumpeters, with an unrestrictive relationship to genre.Tonight, Igmar Thomas — who has received another festival honor, the Roy Campbell Jr. Commission — will perform with his group, preceding a 10 p.m. Campbell tribute featuring more than a dozen trumpeters, conducted by Lewis (Flip) Barnes and Dave Douglas.” (Chinen-NYT)
Cornelia Street Cafe, 29 Cornelia St. (btw W4th/BleeckerSt.)
8:30 & 10 pm / $10, plus $10 minimum.
212-731-0574/corneliastreetcafe.com
For more information about the festival, visit fontmusic.org.

“Barbara Nessim is a pioneer in graphic design. The Bronx-born artist and illustrator was one of the first women in the field in the early 1960s, and her complex designs made waves in the creative world. Her new exhibit features more than150 of her works, ranging from computer-generated illustrations to textiles to fashion and more. The book, “Barbara Nessim: An Artful Life”, exploring the details of the creative designer’s career, accompanies the installation.” (TONY)
Bard Graduate Center Gallery, 18 W 86th St., btw Central Park West/ Columbus Ave
212-501-3023 / bgc.bard.edu/gallery
Tue, Wed, Fri–Sun 11am–5pm / $7; seniors and students $5
Thu 11am–8pm / 5–8pm FREE.
212-501-3023 / bgc.bard.edu

The Coca-Cola Generations In Jazz Festival (through Sept. 30)
“For the fifth year running, Dizzy’s Club Coca-Cola has organized a monthlong series with a multigenerational theme. Headlining this weekend is the Jamaican pianist Monty Alexander, in a program called “Jazz Around the West Indies”.
On Monday and Tuesday the guitarist Peter Bernstein will lead a quartet.
And Wednesday’s program, featuring the alto saxophonists Gary Bartz and Sharel Cassity, will precede a four-night run by the Heath Brothers.” (Chinen-NYT)
Dizzy’s Club Coca-Cola, Rose Hall, Jazz at Lincoln Center, 60th St. and Broadway,
212-258-9595, jalc.org;
At 7:30 and 9:30 p.m. / $25 to $45 cover; $10 minimum at tables, $5 at the bar.

This festival is held on the streets of historic Little Italy, the lower Manhattan neighborhood which served as the first home in America for hundreds of thousands of Italian immigrants who came here seeking to improve their lives beginning in the early part of the 20th century.

This year’s Feast is expected once again to attract more than one-million people from the four corners of the globe to the streets of Little Italy to participate in the annual Salute to the Patron Saint of Naples.

What’s on View:
Special Exhibitions @ 3 Museum Mile / Fifth Ave. Museums:
‘Garry Winogrand’ (LastDay)
Mr. Winogrand, who died at 56 in 1984, was the photographer laureate of urban and suburban middle-class life in the United States from the late 1950s through the ’70s and beyond. This ample retrospective focuses on his prime years, when he recorded a newly prosperous America while strolling Manhattan’s avenues and then followed it as it waded into increasingly troubled political waters. The result is a remarkable panorama of an era, with some terrific pictures, and some that Winogrand, who left a mountain of unprocessed film behind, never edited or printed. 212-535-7710, metmuseum.org. (Cotter-NYT)
‘The Pre-Raphaelite Legacy’ (through Oct. 26)
‘Early American Guitars: The Instruments of C.F. Martin’ (through Dec. 7)
Metropolitan Museum of Art, 1000 5th Ave, at 82nd St.
(212) 535-7710 / metmuseum.org
—————————————————————————————————————————————-

‘Men in Armor: El Greco and Pulzone Face to Face’ (through Oct. 26) 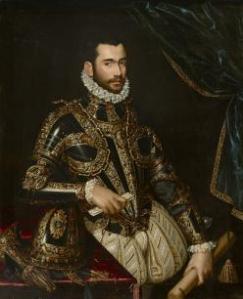 The 400th anniversary celebration of El Greco’s death begins with a stunning clarification of the youthful greatness of his portrait “Vincenzo Anastagi” — a Frick Collection stalwart — that also teaches much about radicalism, fame and painting. This is done simply by pairing it with the obsessively detailed “Jacopo Boncompagni,” a rarely seen portrait by Scipione Pulzone, the now-forgotten artist of the moment in 1570s Rome, where both works were made. (Roberta Smith-NYT)
Frick Collection: 1 East 70th St. (btw 5th/Madison)
212-288-0700, frick.org.
——————————————————————————————————————————-