“We search the internet everyday looking for the very best of What’s Happening, primarily on Manhattan’s WestSide, so that you don’t have to.”
We make it as easy as 1-2-3.  (click on links for complete event info)

>‘See Jane Sing!’ musical comedy show (through Wednesday)
Joe’s Pub at the Public Theater, 425 Lafayette St. / 7PM+9:30PM, $25-$75
“Jane Lynch brings her cabaret act to Joe’s Pub after a well-reviewed run at 54 Below last year. The actress from “Glee” and Broadway’s most recent revival of “Annie” will bring in guests — like Kate Flannery of “The Office — and perform her take on songs.

>The Doo Wop Project
54 Below, 254 W54th St. / 7PM +9:30PM, $30-$80
“The Doo Wop Project, starring leading cast members from the Tony Award-winning Broadway smash Jersey Boys and Motown The Musical, makes its NYC debut with a night of songs mixed with individual stories and references to their upbringings and experiences in the business, particularly backstage at the August Wilson Theatre, home of Jersey Boys, where the idea for the group was conceived four years ago.”

>Baby do Brasil
Bluenote, 131 W3rd St. / 8PM +10:30PM, $15-$25
“considered one of the biggest Brazilian singers, and a music legend who has been revolutionizing the history of the Popular Brazilian Music (MPB). Baby is famous for her soft, indescribable and unique voice, and strong rhythmic versatility not only in her ballads but also in her electric songs.”

>Battery Dance Festival (through Aug 20)
Robert F. Wagner Park, 20 Battery Pl./ 6:30-8:30PM, FREE
“Dance fans can take in some culture — and lovely Hudson River views — during a festival of free nightly performances on an outdoor stage set along the waterfront in the Battery Park City park. The shows will feature a variety of dance companies and styles, including post-modern, classical ballet and Indian.” (dnainfo.com)
today: Ballet Neo, Polish Dance Theater and VIVO Ballet.

> Whiplash
Upright Citizens Brigade Theatre, 307 W 26th St. / 11PM, FREE
popular show is known for always featuring the city’s best up-and-coming comedians.
surprise special guests—Chris Rock, Louis C.K. and David Cross—keep audiences hooked. (tonight’s show is sold out, but there will be a standby line for this show.
listed here to remind you to try for this event earlier next week) 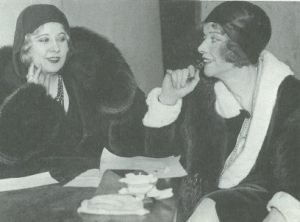 “Celebrate Mae West’s birthday in the very Jefferson Market Court room where she was sentenced to jail. An illustrated lecture will show off West’s Prohibition Era New York, as well as dig into her friendship with actress and fellow publicity hound Texas Guinan

Rare vintage images will show you the buildings around Washington Square as these two headline-makers saw them. Sites include the Village speakeasies where Mae socialized and bent elbows with Texas Guinan, Walter Winchell, Jack Dempsey, George Raft, and Barney Gallant; significant theatres; court rooms where Mae and Texas fought City Hall; and off-beat addresses that made an impact. Rare Texas Guinan silent films will be shown and Mae West’s Jefferson Jail poetry will also be read.

During the 1920s, when Mae West was trying to build her career, the building all dramatists and actresses tried to avoid—Jefferson Market Court at 425 Sixth Ave.—was the very site that made a little-known performer world famous. When New York District Attorney Joab Banton had Mae West arrested and hauled in to Jefferson Market Police Court in a paddy wagon on February 9, 1927, the controversial Brooklyn entertainer made global headlines for the first time.

Though most Broadway headliners avoided negative publicity in the 1920s, these two diamond-draped divas flouted convention, defied the police and became as well known for being handcuffed as for blazing their way onto marquees of the best theatres. They were “onstage outlaws” during the Prohibition Era.

Speaker LindaAnn Loschiavo is a Greenwich Village historian and dramatist; her plays include “Courting Mae West: Sex, Censorship, and Secrets” and “Diamond Lil, Queen of the Bowery.” There will be raffle prizes and also FREE REFRESHMENTS donated by East Village Cheese.” (ThoughtGallery.org)

WHAT’S ON VIEW
My Fave Special Exhibitions – MUSEUMS / Manhattan’s WestSide
(See the New York Times Arts Section for listings of all museums,
and also to see their expanded reviews of these exhibitions)

Museum of Modern Art:
‘One-Way Ticket: Jacob Lawrence’s Migration Series and Other Visions of the Great Movement North’ (through Sept. 7)

“In the early 20th century, tens of thousands of African Americans left the rural South for the industrial North in search of jobs, homes and respect. Officially, this MoMA show is meant to mark the centennial of that immense population shift, though it also marks another anniversary: the first time in two decades that all 60 paintings in Jacob Lawrence’s great “Migration Series,” now divided between New York and Washington, D.C., have been shown together at the museum. Here they are surrounded by period photographs, books and fabulous music in a display as stimulating to the mind and the ear as it is to the eye. 212-708-9400, moma.org.” (Cotter)

“The core of this show is a selection of vivid, Photorealist paintings of urban subjects like glass and chrome storefronts, movie theater marquees, cars and trucks, subways, the Brooklyn Bridge, views from the Staten Island Ferry and idyllic images of Central Park made between 1965 and 2015. The exhibition also includes didactic sections about the craft and technique that go into Mr. Estes painting and prints, but that aspect doesn’t fully deliver what it promises. 2 Columbus Circle, Manhattan, 212-299-7777,madmuseum.org.”(Johnson).
I LOVE THIS ONE.

Whitney Museum of American Art:
‘America Is Hard to See’ (through Sept. 27)
“With high ceilings, soft pine-plank floors and light-flooded windows and terraces, the galleries of the new Renzo Piano-designed Whitney Museum in the meatpacking district are as airy as 19th-century sailmakers’ lofts. Art feels at home in them, and the work in the museum’s top-to-bottom inaugural exhibition is homegrown. Culled from the permanent collection, it mixes bookmarked favorites by Edward Hopper, Georgia O’Keeffe and Jasper Johns with objects and artists that the Whitney had all but forgotten or just brought in. As a vision of a larger America, the show is far from comprehensive; as a musing on the history of a particular New York institution over nearly a century, it is very fine, smartly detailed and superbly presented. 99 Gansevoort Street, at Washington Street, 212-570-3600, whitney.org.” (Cotter)

For other selected Museum and Gallery Special Exhibitions see Recent Posts in right Sidebar dated 08/15 and 08/13.