For future NYC Events, check the tab above: “NYC Events-August”
It’s the most comprehensive list of top events this month that you will find anywhere.
Carefully curated from “Only the Best” NYC event info on the the web, it’s a simply superb resource that will help you plan your NYC visit all over town, all through the month.

Buster Poindexter (Summer Residency)
City Winery / 8PM, $25+
“Today, the words “blues” and “shouting” are, alas, inextricably linked, but what about the tradition of mellow blues crooners that extended through Charles Brown, Nat King Cole and, in their more romantic moments, Joe Williams and Ray Charles? “Buster Poindexter” (nee David Johansen) first attracted attention as a glam rock pioneer (in the New York Dolls, with whom he still tours) and then as an early MTV idol (with “Hot Hot Hot”). Yet with his big, deep, resonant voice, Buster Poindexter is most impressive as a crooner and occasional belter of ballads in the classic R&B tradition. His ongoing run affirms the point that however you know him, the artist known as Buster Poindexter, complete with his one-liners and longer comic monologues (not to mention his signature pompadour), is one of the most endearing and enduring entertainers currently trodding the boards in New York.”

Stanley Jordan Trio (Aug.23-25)
Iridium, 1650Broadway / 8PM, +10PM, $30
“Way back in the ’80s, when he arrived on the scene to help resuscitate the Blue Note jazz label, Jordan’s slick brand of guitaristics was all about showing off his “magic touch.” These days he can get awful gritty when the feeling hits, in the manner of a modern-day Wes Montgomery. This weekend, Jordan heads a solo show (Aug 23) and two nights in a trio format (Aug 24, 25).” (TONY)

“Hershey Felder as Irving Berlin brings the man behind the iconic music to life in an evening reflecting Berlin’s remarkable journey from child immigrant to America’s most beloved and prolific songwriter, and featuring the some of the composer’s most popular and enduring songs including “Alexander’s Ragtime Band,” “Always,” “Blue Skies,” “God Bless America,” “Puttin’ on the Ritz,” “There’s No Business Like Show Business,” and “White Christmas.”

Karrin Allyson (Aug. 24-26.)
Smoke, 2751 Broadway, between 105th and 106th Sts./ 7, 9, +10:30PM, $40
“In her search for repertoire that fits her like a glove, this veteran singer has lighted on touchstones from, among a small universe of disparate sources, Joni Mitchell, Rodgers and Hammerstein, Antonio Carlos Jobim, and John Coltrane. With her new album, “Some of That Sunshine,” Allyson presents her first recording of all-original material. She will sprinkle some shiny new tunes throughout her sets.” (Steve Futterman, NewYorker)

CHARLES ALTURA (Aug. 24-25,
at the Jazz Gallery / 7:30 and 9:30 p.m., $25
“Mr. Altura is a virtuoso guitarist who seems unfazed in almost any context. He came up on the Los Angeles scene in the mid-2000s, playing blazing fusion alongside Thundercat, and now he’s a central part of projects led by Terence Blanchard, Chick Corea and Ambrose Akinmusire — all jazz luminaries. This weekend Mr. Altura presents a new work of his own, commissioned by the Jazz Gallery, titled “Portraits of Resonance.” His top-flight band will include Adam O’Farrill on trumpet, Aaron Parks on piano, Joe Martin on bass and Kendrick Scott on drums.” (NYT-GIOVANNI RUSSONELLO)

OK, this is not Manhattan’s WestSide but it might just be worth the detour:
FISHBONE
at Brooklyn Bowl / 7:30 p.m., $25
“According to the Roots drummer and music scholar Questlove, this pioneering ska, funk and rock band is “the greatest band that the world ignored.” Despite their influence on bands like the Red Hot Chili Peppers and No Doubt, they have long been relegated to cult-classic status. Now, for the first time in almost two decades, the original lineup (except for guitarist Kendall Jones) is back — and their politically charged, deeply funky music has rarely felt more timely.” (NYT-NATALIE WEINER)

Harold Mabern (Aug. 21-26.)
Village Vanguard, 178 Seventh Ave. S., at 11th St./ 8:30PM +10:30PM, $35
“This fluent and eminently soulful pianist is no stranger to New York clubs, but it’s always an event when he appears at this hallowed venue. A Memphis transplant who carried his deep blues roots up North with him in the early sixties, Mabern will be supported by two trusted associates: the bassist John Webber and the drummer Joe Farnsworth.” (Steve Futterman, NewYorker)

Under Basie’s leadership — with a strong commitment to making sure every tune was danceable — the orchestra featured many of the greatest instrumentalists and vocalists in jazz including Billie Holiday, Lester Young, Harry “Sweets” Edison, Joe Jones, Joe Williams, Snooky Young, Frank Foster, Thad Jones, Frank Wess, Clark Terry, and many more. They played for Kings and Queens, appeared in movies and television shows, and won 18 Grammy® Awards, the most for any orchestra. Today, under the leadership of director, Scotty Barnhart, The Count Basie Orchestra is traveling the world, swinging and shouting the blues with precision, in Count Basie’s unmistakable style of Kansas City swing.”

2018 U.S. Open Fan Week (Aug.21-26)
Flushing Meadows-Corona Park /
“There’s going to be a lot of racket (swinging) at Flushing Meadows-Corona Park come August 27 during the U.S. Open, a two-week tennis tournament at the USTA Billie Jean King National Tennis Center in Queens. Tickets for the usually star-studded matches (Bey and Jay-Z attended in recent years) tend to be steep ($65 to $100 for the cheap seats), but you can attend free of charge during U.S. Open Fan Week.

Just one week before the professional matches begin, head to the National Tennis Center to watch a qualifying tournament, where 128 women and 128 men compete. You can also check out the top dogs in tennis practice on the grounds (think Serena and Venus Williams and Rafael Nadal), and be just a few feet away from your favorite players. There’s even more tennis-related activities scheduled off the court, too. Get pumped for New York’s major summer sporting showdown during the U.S. Open Experience on Wednesday, August 22 and Thursday, August 23 at Brookfield Place. Players and special guests will make appearances and pose for selfies, and there will be food sampling and more sponsor-related activities at the scene. The event promises to be more fun than you can shake a racket at!” (TONY)

For a wonderful guide to the U.S. Open, try TimeOutNewYork’s guide.

Candytopia (thru Nov.15)
Candytopia @ Penn Plaza, 145 W. 32nd St./ 10AM-8:30PM, $34
“This interactive candy exhibit, which has drawn the likes of Drew Barrymore, Gwyneth Paltrow, James Corden and Wiz Khalifa from California, has more than a dozen rooms and art installations including a swimming pool filled with about half a million giant marshmallows; unicorn-pig hybrids that fart confetti; a candy-covered Sphinx sculpture; and candy recreations of such artworks as the “Mona Lisa,” Van Gogh’s “The Starry Night” and Rodin’s “The Thinker.” (amNY) &  (amNY)
DIVE INTO A HUGE MARSHMALLOW PIT AT CANDYTOPIA
“First it was in Los Angeles, and now it’s made its way to the east coast. Candytopia is officially open in NYC! Just like many other pop-ups, this one has uniquely designed rooms — except this one is all about candy. If you have a sweet tooth, you’ll want to snag a ticket and enjoy the marshmallow pit and candy-filled rooms.” (bestproducts.com)

Bonus NYC events– Jazz Clubs:
Many consider NYCity the Jazz capital of the world. My favorite Jazz Clubs, all on Manhattan’s WestSide, feature top talent every night of the week.
Hit the Hot Link and check out who is playing tonight: 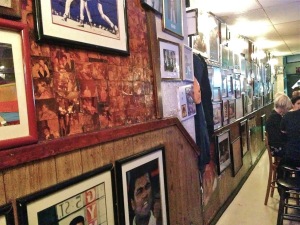 Times Square today is filled with neon glitz and wandering tourists from Dubuque, but not Jimmy’s. You’ll likely find some old timer’s at the bar nursing their drinks, some younger locals at tables in the back, and maybe a few adventuresome tourists clutching their trusty guidebooks. There’s no food served here because this is just a bar, and sometimes that’s all you need.