Posted on 04/01/2020 by GregD
Pre Covid-19 we searched the internet everyday looking for the very best of What’s Happening, primarily on Manhattan’s WestSide, so that you don’t have to.” We made it as easy as 1-2-3.

Covid-19 has required some changes for the time being. Stay Safe.

For the month of April we are going to try a different format – on some days we will go visual and offer a selection of the very best NYCity Instagram photos, YouTube videos, or Pinterest Pins. On other days you will find info on the Best NYC Restaurants or Top OnlineTravel Forums with NYC info. We hope you will come back often to see what’s cooking here. Today it’s NYCity on You-Tube & Pinterest.

There are some very fine YouTube videos and Pinterest Pins that cover New York City and are endlessly fascinating. Here are some of my faves:

Central Park – Everything You Need to Know

How to photograph New York City from a Helicopter

The best of New York City in a few days trip 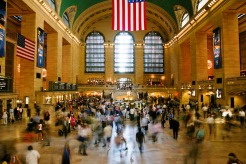 We hope you enjoy this change of pace, then please return here May 1, and every day for our daily, hot off the presses event guide with “Only the Best” NYCity event info.

nycpicks 5 BEST THINGS TO DO THIS WEEKEND

At-home Broadway action from ‘Stars in the House’

a daily mini-show presented online only. The show features stage and screen stars such as Kelli O’Hara, Brian Stokes Mitchell, Sara Bareilles and more performing live from the healthy confines of their own homes, as well as clever conversation between the married pair.

The advent of the COVID-19 pandemic caused the Metropolitan Opera to cancel the rest of its 2019-2020 season. Buffs can still enjoy nights at the opera by viewing past performances from the Met’s “Live in HD” series streamed online daily for 20 hours; the streams will also be available via On Demand apps for Apple and Amazon plus Roku devices and Samsung Smart TV. Broadcast information, updated timings and cuesheets will be posted Thursday nights. Among the performances you can catch is “La Traviata” starring Diana Damrau and Juan Diego Florez (pictured).

Instructor Anita Haravon (pictured) and the folks at All Beings Yoga have found a way to help the masses find inner peace by offering one-hour Live Stream Yoga sessions. Registered participants will receive a meeting link by email five minutes before each online class begins. WHEN 9:30 a.m. Saturday-Sunday and 7 p.m. Tuesday and Thursday

INFO $20 per class; register at allbeingsyoga.com

Tour the Guggenheim from a social distance

Like other museums, the Guggenheim is closed, but it’s got a heck of an online presence. Visit the museum’s site to hear Guggenheim staffers and radio host Roman Mars discuss the museum’s architecture and to view lots of its collection or take a virtual tour via Google Arts and Culture (artsandculture.google.com)

92nd Street Y, like all other city performance spaces, has suspended its in-person programs, but you can still see its shows, many of which will be streamed live for the time being. Among the shows scheduled to stream: a 3 p.m. Sunday performance by pianist Anthony de Mare (pictured), who will be paying tribute to the iconic composer Stephen Sondheim, who just celebrated his 90th birthday.