For future NYC Events, check the tab above:  “August NYC Events”
It’s the most comprehensive list of top events this month that you will find anywhere.
Carefully curated from “Only the Best” NYC event info on the the web, it’s a simply superb resource that will help you plan your NYC visit all over town, all through the month.
OR to make your own after dinner plans TONIGHT, see the tab above;  “LiveMusic.”

John Pizzarelli: A Tribute to Benny Goodman w/ Special Guest Ken Peplowski
Birdland / 8:30PM, +11PM, $40-$50
“John Pizzarelli charms audiences with his warmth, sense of humor, and musical chops. Through his multi-faceted career as a jazz guitarist, vocalist and bandleader, the son of the legendary New Jersey native guitarist Bucky Pizzarelli, has become one of the most recognizable faces and voices in contemporary jazz for his interpretations of classic standards, romantic ballads and the cool jazz flavor he brings to his performances and recordings

Ken Peplowski has recorded approximately 50 CDs as a soloist, and close to 400 as a sideman – some of the artists he’s performed/recorded with include Charlie Byrd, Mel Torme, Rosemary Clooney, Erich Kunzel and the Cincinnati Pops, Hank Jones, Peggy Lee, Bill Charlap, Woody Allen, Benny Goodman, and Madonna. He travels at least half of every year, playing clubs, concert halls, colleges, and pops concerts.”

An Evening of Stand-Up Comedy: Roy Wood Jr., Ronny Chieng, Julio Torres, Maeve Higgins, and more
Catch a comedy show without a drink minimum
Damrosch Park, Lincoln Center / 7:30PM, FREE
“Lincoln Center’s “Out of Doors” festival brings the city’s best talent out of the theater and under the stars — on Saturday night, they’re hosting a free stand-up comedy show at the Guggenheim Bandshell in Damrosch Park. Headlined by Roy Wood, Jr., the show also features The Daily Show’s Ronny Chieng and Saturday Night Live’s Julio Torres, fresh off his first season of HBO’s beautiful, weird Los Espookys. It’s a big venue for a stand-up, but the lineup has more than enough star power to command the stage.” (thrillist)

PETER BERNSTEIN AND GILAD HEKSELMAN
at the Jazz Gallery / 7:30 and 9:30 p.m.; $25-$35
“Here’s a two-for-one deal for fans of masterful jazz guitar. With an ore-like tone and a deep sense of assurance, Bernstein, 51, refers back to classic jazz guitar influences like Grant Green and Pat Martino. Hekselman, 36, owes a lot to the more nebulous tone of Kurt Rosenwinkel, though he has a knack for playful misdirection and blues inflection that gives him an identity of his own. Occasionally Bernstein and Hekselman come together in a quartet, sparring over jazz standards. For this date they are joined by the bassist Ben Street and the drummer Eric McPherson.” (NYT-GIOVANNI RUSSONELLO)

BOY BLUE (Aug. 1-3)
at Gerald W. Lynch Theater / 7:30 p.m.; $45
“This East London hip-hop group, last seen at the 2018 White Light Festival, returns to Lincoln Center for an encore of its acclaimed political and virtuosic “Blak Whyte Gray.” Presented this time by the Mostly Mozart Festival, the company explores themes of oppression, identity and transcendence. Michael Asante (also known as Mikey J) is credited with creative direction and music, while Kenrick Sandy (who goes by H2O) is the piece’s choreographer.” (NYT-Gia Kourlas)

Ben Wolfe Quintet featuring Randy Brecker and Warren Wolf (Aug.1-4)
Dizzy’s Club / 7:30PM, +9:30PM, $40
Ben Wolfe is a bassist and composer who “swings with authority,” according to Wynton Marsalis.Wolfe’s annual return to Dizzy’s Club is always an anticipated occasion, and his shows this year will be extra special, serving as a combined birthday and album release celebration. From August 1–4, Wolfe will give audiences exclusive access to his upcoming album, Fatherhood, set for release on August 30.

Special guests include trumpet icon Randy Brecker (8/1-8/3), a six-time Grammy Award winner as a bandleader, and Warren Wolf, one of the leading voices on the vibraphone and protégé of the all-time great Bobby Hutcherson. The entire lineup is outstanding, and anyone interested in contemporary jazz should make sure to catch at least one of these sets.”

Avishai Cohen Trio (Aug.1-4)
Blue Note, 131 W. 3rd St./ 8PM, +10:30PM, $20-$35
“Avishai Cohen, the Israeli bassist (not the fine Israeli trumpeter of the same name), has been drawing attention as a first-rank instrumentalist since he began associating with Chick Corea, in the late nineties. As a leader of his own small, inquisitive groups, Cohen aligns his superlative gifts with those of topnotch players; here, he reunites with a 2008 trio that featured the pianist Shai Maestro and the drummer Mark Guiliana, two questing improvisers who have since gone on to individual acclaim.” (Steve Futterman, NewYorker)

Hong Kong Dragon Boat Race (Aug.3-4)
Attend an ancient dragon festival
Flushing Meadows Park/ 9AM-5PM; FREE
“The Hong Kong Dragon Boat Race — now in its 29th year in New York City — honors the story of Qu Yuan, an exiled poet and activist who drowned himself in 278 B.C. Legend (and the event page) has it that the local fishermen, in an attempt to save the poet, raced into the river, throwing rice into the water as an offering. On the days of the Dragon Boat Festival, you can snack on dumplings, watch over 120 dragon boats race across the lake, and see music and dance performances.” (thrillist)

“Lincoln Center’s Mostly Mozart Festival will run from July 10 through August 10, 2019. Harnessing Mozart’s innovative spirit as its inspiration, this edition will feature groundbreaking, multidisciplinary, international productions and acclaimed artists from a variety of genres, introducing the audience to emerging creative voices, commissions and premieres.  The program will include performances from Mark Morris Dance Company, a panel discussion on Mozart’s Magic Flute, a screening of the film The Great Buster: A Celebration, and much more. For a full festival lineup, visit the Mostly Mozart Festival event page.” (nyc-arts.org)

“The more than three-week-long promotion featuring two-course lunches ($26) and three-course dinners ($42) at some of the city’s best restaurants is back for its summer edition starting July 22. This time around, the celebration features prix-fixe meals at more than 380 eateries, with deals through Aug. 16. 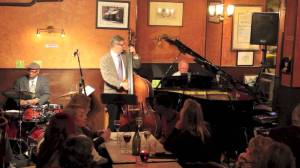 CAFFE VIVALDI HAS CLOSED, VERY SAD.
I HAVE LEFT THIS REVIEW ON MY SITE AS A KIND OF MEMORIAL.
As reported in the “Gothamist”:
“Caffe Vivaldi, one of the last bohemian bastions of the West Village, is set to close this weekend. During its 35 years on Jones Street, the casual cafe won the hearts of locals and celebs alike, including Oscar Isaac, Bette Midler, and Al Pacino.

◊ For all my picks of 54 Good Eating places, and essays on my favorite 18 PremierPubs in 9 Neighborhoods on Manhattan’s WestSide, order a copy of my e-book:
“Eating and Drinking on NYCity’s WestSide” ($4.99, available FALL 2019).
◊ Order before NOV. 30, 2019 and receive a bonus – 27 of my favorite casual dining places with free Wi-Fi.