For future NYC Events, check the tab above:  “October NYC Events”
It’s the most comprehensive list of top events this month that you will find anywhere.
Carefully curated from “Only the Best” NYC event info on the the web, it’s a simply superb resource that will help you plan your NYC visit all over town, all through the month.

DICK HYMAN, KEN PEPLOWSKI AND BILL CHARLAP
at Dizzy’s Club / 7:30 and 9:30 p.m.; $50
“Hyman’s career has included work for studio orchestras in the early years of television, recording some of the first commercial experiments with synthesizers in the 1960s, and the leadership of jazz-repertory bands large and small. A National Endowment for the Arts Jazz Master, he has become arguably the most respected living musician devoted to the jazz piano’s early history. Here he performs with the tenor saxophonist and clarinetist Ken Peplowski, who’s possessed of a warm, soothing tone and a similar love for old jazz repertoire. For the 9:30 p.m. set, Hyman will share the piano chair with Bill Charlap, his distant cousin and a distinguished pianist in his own right.” (NYT-GIOVANNI RUSSONELLO)

American Ballet Theatre: The Masters in New York
NYS Theater, Lincoln Center / 6:30 p.m.; $
“Wednesday’s season-opening gala is composed of one classic and two new works. That classic is George Balanchine’s “Theme and Variations,” an elegant exercise in stamina that he made for Ballet Theater in 1947. The premieres come courtesy of Jessica Lang, who created a short, jazzy piece set to songs by Tony Bennett, and Twyla Tharp, with her first new work for this company in a decade. Tharp’s piece, “A Gathering of Ghosts,” honors the 20-year tenure of the principal dancer Herman Cornejo. On Thursday, the Balanchine and the Tharp are shown with Alexei Ratmansky’s fresh, joyful, recent ballet, “The Seasons.” (NYT-Brian Schaefer)

Flamenco Vivo Carlota Santana (Oct. 16-18)
Le Poisson Rouge, 158 Bleecker St./ 7:30PM, $55
One of the best ways to experience flamenco is in the intimacy of a café cantante or a tablao, close to the sparks but cooled by a beverage. Flamenco Vivo replicates that experience at Le Poisson Rouge, with wine and cocktails for purchase and musicians and dancers from Spain, including Lucía Alvarez, Isaac Tovar, Fanny Ara, and Emilio Ochando.” (Brian Seibert, NewYorker)

The Metropolitan Opera
Tonight:  Porgy and Bess (next Jan.8, 7:30PM)
Metropolitan Opera House / 3PM, $53+
“One of America’s favorite operas returns to the Met for the first time in nearly 30 years. James Robinson’s stylish production transports audiences to Catfish Row on the Charleston waterfront, vibrant with the music, dancing, emotion, and heartbreak of its inhabitants. “If you’re going to stage Gershwin’s opera, this is how,” raved the Guardian when the new production premiered in London in 2018. David Robertson conducts a dynamic cast, featuring the sympathetic duo of Eric Owens and Angel Blue in the title roles and an all-star ensemble that includes Golda Schultz, Latonia Moore, Denyce Graves, Frederick Ballentine, Alfred Walker, and Ryan Speedo Green.”

Chita Rivera (LAST DAY)
Feinstein’s/54 Below / 7PM, $75+
“Rivera came to New York in the early 1950s, and the rest is razzle-dazzle history: starring roles in the original casts of West Side Story, Bye Bye Birdie and Chicago; 10 Tony nominations (including two wins); the 2002 Kennedy Center Honors. She’s often called a legend, but she’s very much real—and, at 86, still firmly in command of her talents.” (TONY)

Elsewhere, but these two in Brooklyn look worth the detour:

SPELLLING
at Elsewhere / 8 p.m.; $
“This Bay Area singer-producer’s moniker refers to bewitching, and her music is fittingly spooky. Spellling, whose real name is Tia Cabral, found her creative bearings in poetry and visual art, and began writing songs just a few years ago after seeing another poet perform with a looping station. Guided by a fiercely experimental instinct, Cabral released her first album, “Pantheon of Me,” in 2017, and followed it up in February with “Mazy Fly.” The surprising array of textures found on that record include airy R&B vocals à la Solange, wah-wah pedals and, on the album’s highlight “Secret Thread,” an outro that would sound at home in a haunted funhouse.” (NYT-OLIVIA HORN)

SIMONA PREMAZZI QUARTET
at Bar Bayeux / 8 p.m.; $
“Based in New York since the mid-2000s, this Italian pianist writes and plays with a keen sense of melodic counterintuition. Her pieces move swiftly from darkness to light; listening to her solo can feel like being tossed on the waves of a storm, though the ship is never at risk of going down. Premazzi hasn’t released a full-length album since 2017, but earlier this year she put out a two-track EP paying tribute to the free-jazz piano pioneer Cecil Taylor that contained, not altogether surprisingly, zero compositions by Taylor himself (the pieces were extrapolations on Ornette Coleman’s “Peace” and Miles Davis’s “All Blues”). Still, it bore clear debts to Taylor’s slashing, multilayered style. Premazzi appears at Bar Bayeux with a quartet featuring Mark Shim on tenor saxophone, Joe Martin on bass and Kush Abadey on drums.” (NYT-GIOVANNI RUSSONELLO)

Ron Carter (Oct. 1-26)
Birdland, 315 W. 44th St./ various times, $30-$40
“If Ron Carter had retired in the mid-seventies, after helping cement the sonic identity of the now revered CTI Records, he’d still be recognized as one of the most substantial bassists in jazz history, having shared stages with a slew of legendary figures (including Miles Davis) and recorded with dozens more—but he didn’t. He has since added thousands of recordings to his résumé and established a respected solo career. Week one of this monthlong stint features the exemplary instrumentalist fronting his Great Big Band.” (Steve Futterman, NewYorker)

Archtober (Oct.1-31)
Various Locations / Times
“During this monthlong architecture-and-design festival, you can poke around NYC’s most prominent buildings (like the new Statue of Liberty Museum), attend lectures, films and other events—such as seeing Erez Nevi Pana’s piece Bleached at Cooper Hewitt.” (TONY)

Steely Dan
October 15, 16, 18, 19 and 22
Beacon Theatre
Donald Fagen keeps the jazz-rock music of Steely Dan, familiar from songs like “Do It Again,” “Reelin’ in the Years” and “Rikki Don’t Lose That Number,” going strong.
Advertisement 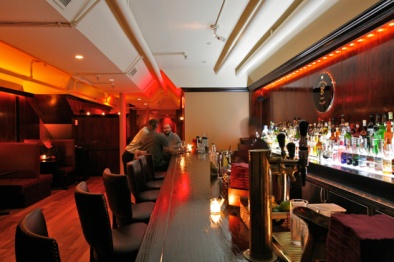 There are some places that are tough to find, then add a layer of mystery when you do find them. B-Flat has a nondescript, almost unmarked door at street level – today’s speakeasy vibe. Open this door and you face a dimly lit stairway down to their basement location. It almost takes a leap of faith to follow the stairs down to their interior door.
But open that door and a pleasant surprise awaits you.

It’s a basement jazz spot all right, but not like any traditional jazz joint you may have been to before. This place looks as fresh as today, probably because it’s only been open for 6 years. Even though it hasn’t had a chance to age gracefully, the cherry wood accents and low lighting make this small space very inviting.

There is always jazz, often progressive jazz, playing over their very discrete, stylish bose speakers, setting just the right tone as you find a seat at the bar, or one of the small tables. There is wine and beer available, but this place has some expert mixologists making some very creative cocktails, which I’m told change seasonally, a nice touch.

Come at happy hour and tasty cocktails like the el Diablo or the lychee martini are $8 – not bad. I am a sucker for any drink made with lychee and how can you not try a tequila drink named el Diablo. There is also nice selection of small bites available at happy hour and a food menu that is as innovative as the cocktail menu, so this does not have to be a happy hour only stop.

It wasn’t surprising to find a tasty prosciutto and arugula salad with yuzu dressing, but I did not expect to find such a good version of fried chicken breast on the apps menu. Here it’s called “Tatsuta.” Best bet is to sample happy hour, then dinner on a Monday or Wednesday night, when you can finish with no cover live jazz that starts around 8.

This place is tough to find (look for a small slate sandwich board on the sidewalk out front advertising happy hour) and on some nights when there is no live music it may be a little too quiet for some. But I think it’s worth searching out if you want a place with good music, food, and especially drinks, away from the maddening crowd.