JOHN SCOFIELD AND DAVE HOLLAND (Nov. 26-Dec.1)
at the Blue Note / 8 and 10:30 p.m.; $30-$45
“There’s really no way to “O.K. boomer” these two. Each has a stint with Miles Davis on his résumé, and they’ve both been in the game for decades. But neither Scofield, an acid-toned guitarist, nor Holland, a brilliantly versatile bassist, has ever planted his feet in a set approach. And both continue to work in conversation with younger musicians — even as they carry the flag for the jazz-rock fusion movement, in which they played an essential role. Here they will perform in an intimate duet.” (NYT-GIOVANNI RUSSONELLO)

NY Philharmonic Open Rehearsal (next Thu. Dec.5)
David Geffen Hall, Lincoln Center / 9:45AM, $22
An Open Rehearsal is a fascinating opportunity to watch the New York Philharmonic at work, and see how a piece of music is shaped and polished by the conductor and the musicians. All Open Rehearsals are “working” rehearsals and therefore the program may not be played in its entirety.

Program to Include
Scriabin: Piano Concerto
Tchaikovsky: Symphony No. 5

Open Rehearsals begin at 9:45 AM (except where noted) in David Geffen Hall, and end at approximately 12:30 PM (sometimes extending to 1 PM, at the discretion of the conductor).

Jason Moran & the Bandwagon (Nov.26-Dec.1)
Village Vanguard, 178 Seventh Ave. S. / 8:30PM, +10:30PM, $35
“Since September, the pianist and composer Jason Moran has been applying his conceptual gifts to a mixed-media art exhibition at the Whitney, performing in mock re-creations of iconic jazz venues. For this engagement, at another famed locale a few blocks away, Moran employs his long-standing Bandwagon trio, a daringly inclusive ensemble—with the bassist Tarus Mateen and the drummer Nasheet Waits—that exemplifies the multidirectional, go-for-broke spirit of the most compelling modern jazz.” (Steve Futterman, NewYorker)

Broadway the Calla-way (Nov.26-30)
Feinstein’s/54 Below (254 W54th St., btw Broadway/Eighth Avenues). / 8PM, $85+
“Starting November 26, the Tony-nominated sisters host their own show at Feinstein’s/54 Below, performing a mixture of Broadway favorites by Sondheim, Bernstein, Rodgers and Hammerstein, Schwartz, and more. For this special Thanksgiving performance, there is a Thanksgiving dinner prix fixe with curated holiday dishes.” (Playbill)

Bob Dylan (thru Dec.6)
Beacon Theatre, 2124 Broadway / 8PM, $99+
“Bob Dylan famously maintains a restless touring schedule that renders him a nomad for much of the year but often returns him to the place of his artistic birth; this year, he settles in for a whopping ten-night stand. Among rock élites, Dylan remains peerless. His concerts are strictly pander-free zones—no cheesy pleas to clap or sing along, no glut of backup musicians, usually no “Like a Rolling Stone.” Rather, Dylan asks audiences to ignore his legend and engage with his firecracker band, its every elegant rumble rooted to the present.” (Jay Ruttenberg, NewYorker)

SOLEDAD BARRIO & NOCHE FLAMENCA
at the Joyce Theater / 7:30 pm.; $45+
“The fleet footwork of flamenco can be mightily impressive, but this company doesn’t aim to merely wow. In recent years, Noche Flamenca and Barrio, its incandescent headliner, have moved away from spectacle seeking authentic communal encounters. A new iteration of its production “Entre Tú y Yo” (“Between You and Me”) comprises three works: a revised version of “La Ronde,” which explores facets of the duet form; “Refugiados,” created 15 years ago from poems by refugee children; and “Soleá,” a semi-improvised solo by Barrio that impresses not only for its virtuosity, but for the thrilling internal drama she shares.” (NYT)

Judy Collins ‘Winter Stories’ (Nov.18-27)
Joe’s Pub / 7PM, $40+
“In just a few weeks on November, 29th, singer, songwriter, author, and activist Judy Collins will release her fourth new album in the past four years, Winter Stories, a collection of songs that capture the sounds and feel of the winter season. Just in time for the holiday, Winter Stories features Norwegian folk artist Jonas Fjeld and harmonizing newgrass group Chatham County Line.”
Hear Judy celebrate the release of the album with an eight-night run of shows at Joe’s Pub.

♦ Before making final plans, we suggest you call the venue to confirm ticket availability, plus dates and times, as schedules are subject to change.
♦ NYCity, with a population of  8.6 million, had a record 65 million visitors last year and was TripAdvisor’s Traveler’s Choice Top U.S. Destination for 2019 – the ninth consecutive year. But quality shows draw crowds. Try to reserve seats for these top NYC events in advance, even if just earlier on the day of performance.

Walk only five minutes from the 125th St. station on the #1 line to find this authentic honky-tonk barbecue joint. Some folks think Dinosaur is just a place to eat ribs. Not so. With 24 carefully selected taps, this is a place to drink beer, and eat ribs. 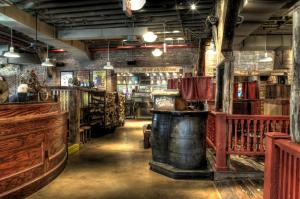