For future NYC Events, check the tab above:  “December NYC Events”
It’s the most comprehensive list of top events this month that you will find anywhere.
Carefully curated from “Only the Best” NYC event info on the the web, it’s a simply superb resource that will help you plan your NYC visit all over town, all through the month.

BUSTER WILLIAMS QUARTET
at Smoke / 7 and 9 p.m.; $38
“Among the most storied living jazz musicians, this bassist has performed with the likes of Nancy Wilson, Herbie Hancock, the Jazz Crusaders and countless others. At 77, he often appears nowadays as a bandleader, funneling his decades of broad-ranging experience into a style that’s firmly rooted in straight-ahead jazz but deeply flexible and funky. He performs this weekend with the same all-star quartet featured on his 2018 album, “Audacity”: Steve Wilson on saxophone, George Colligan on piano and Lenny White on drums. The group will likely play some of Williams’s pithy, melodic originals featured on that album.” (NYT-GIOVANNI RUSSONELLO)

7 OTHER TOP NYC EVENTS TODAY (see below for full listing)
>> The Queen of Spades
>> JOHNATHAN BLAKE AND PENTAD
>> Masterworks Series – Johnny Gandelsman
>> “Why Is This Happening? with Chris Hayes” Podcast Tour
>> Deck the Stalls Holiday Market
>> Shop for offbeat gifts at the Oddities Flea Market
>> Fruit and Grain: a Beer and Cider Festival

The Metropolitan Opera
The Queen of Spades (next Dec.14 1PM)
Metropolitan Opera House / 3PM, $103+
“Tchaikovsky’s eerie thriller of imperial Russia has its first performances at the Met since 2011. Tenor Aleksandrs Antonenko is Hermann, the fanatical gambler whose obsession with a powerful secret drives him to madness. Soprano Lise Davidsen makes her highly anticipated Met debut as his long-suffering lover, Lisa, with mezzo-soprano Larissa Diadkova as the otherworldly Countess. Baritone Igor Golovatenko is Yeletsky, baritone Alexey Markov is Tomsky, and Vasily Petrenko conducts.”

JOHNATHAN BLAKE AND PENTAD
at the Village Vanguard / 8:30 and 10:30 p.m.; $35
“Blake, a drummer, has long been one of jazz’s more respected sidemen, working regularly with luminaries like Kenny Barron and Tom Harrell. But he’s also kept an equally rich (if far quieter) career track running alongside as a bandleader. Earlier this year, he put out the remarkable trio album “Trion,” and soon after he unveiled Pentad, a quintet featuring Immanuel Wilkins on alto saxophone, David Virelles on piano, Joel Ross on vibraphone and Dezron Douglas on bass. This weekend that group is at the Vanguard, where Blake is making his bandleading debut. (Kris Davis will fill in for Virelles from Friday through Sunday.)” (NYT-GIOVANNI RUSSONELLO)

Masterworks Series – Johnny Gandelsman
Bargemusic, Fulton Ferry Landing / 4PM, $35
“When you’re a violinist who has mastered and recorded a personal interpretation of Bach’s foundational sonatas and partitas, a question arises: What next? Johnny Gandelsman, an unconventional virtuoso known for his work with the Silk Road Project and Brooklyn Rider, opts for a path less travelled. In two Bargemusic recitals, on Friday and Sunday, he appropriates and adapts the composer’s equally monumental Suites for Solo Cello.” (Steve Smith, NewYorker)

“Why Is This Happening? with Chris Hayes” Podcast Tour
The Town Hall, 123 W. 43rd St./ 7PM, $45+
“MSNBC’s Chris Hayes will record his podcast “Why Is This Happening?” in front of a live audience at The Town Hall in New York City. Chris will be joined by special guests Tony Kushner, the Pulitzer Prize-winning playwright of Angels in America, and Jeremy O. Harris, actor and playwright of Slave Play. They’ll engage in a wide-ranging conversation about politics, spectacle and storytelling during these surreal times.” (ThoughtGallery)

Fruit and Grain: a Beer and Cider Festival
Sip spiked ciders for a cause
849 6th Ave. 2nd Fi./ 12-5PM, GA tickets are $75 and include unlimited tastings; food available for purchase
“The Fruit and Grain festival gathers more than 60 breweries, cideries, and distilleries from all over New York state under one roof. You can sip beers and ciders, rock out to a live DJ, play Mario Kart and cornhole, and then go back for even more beer and cider. A portion of the ticket sales — and all profits from merch sales — will go towards the Refugee and Immigrant Center for Immigration and Legal Services, a nonprofit dedicated to providing free and low-cost legal services to underserved communities.” (thrillist)

Shop for offbeat gifts at the Oddities Flea Market
“At an event curated by Ryan Matthew Cohn of Science Channel’s “Oddities” and produced by his spouse Regina Cohn (both pictured), this “Holiday of Wonders” market gives those looking for holiday gifts a chance to find the offbeat, unusual and unexpected. Items range from anatomical curios and art inspired by the dark side of life to taxidermy, jewelry and medical history ephemera. Take a break from browsing by dining on wood-fired pizzas from Roberta’s ( robertaspizza.com).” (Newsday)
WHEN | WHERE 10 a.m.-noon Dec. 7-8; Villain LLC, 307 Kent Ave, Brooklyn
INFO $30; theodditiesfleamarket.com

GEORGE BALANCHINE’S THE NUTCRACKER
NEW YORK CITY BALLET (THRU Jan.5)
NYS Theater, Lincoln Center/ TODAY: 2PM, +8PM,; $95+
“’Twas the day after Thanksgiving and all through the land, ballet companies began trotting out productions of “The Nutcracker,” a holiday dance tradition most grand. And in New York, the grandest among them is City Ballet’s, formally known as “George Balanchine’s The Nutcracker,” which has been performed since 1954. That title rightly emphasizes this version’s secret weapon: Act II’s glorious choreography, particularly the breathtaking final pas de deux between the Sugarplum Fairy and her cavalier. Act I has its own virtuosic feat in the form of a supersize Christmas tree, which captures all the magic and wonder of this familiar tale.” (NYT-Brian Schaefer) 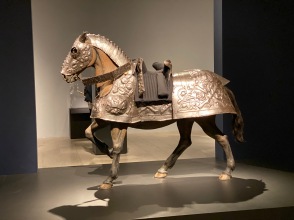 Like Loading...
This entry was posted in Uncategorized and tagged “Why Is This Happening? with Chris Hayes”, BUSTER WILLIAMS QUARTET, Deck the Stalls Holiday Market, NYC Events, NYC Events Today, The Queen of Spades. Bookmark the permalink.