With support from the Loewe Foundation, Dizzy’s Club Coca-Cola celebrates the great Lerner and Loewe musicals by revisiting Lowe’s timeless compositions in a swinging jazz context. This program will continue the popular and fruitful relationship between musical theater and jazz—a relationship in which Lerner and Loewe played an essential role.”

Del Close Marathon (June 29-July 1)
multiple locations and times, $12-$45,
“Give yourself a well-deserved weekend of laughter while honoring the best of improv with 56 straight hours of comedy on 11 stages in Manhattan. The Del Close Marathon is dedicated to the legendary laughman who elevated improv into its own art form with over 750 shows spanning one weekend, thanks to the Upright Citizens Brigade. You can buy individual tickets to certain shows or festival passes that allow you to line up for general admission all weekend.” (Metro)

Ravi Coltrane (June 26-30)
Birdland, 315 W. 44th St./ 8:30PM, +11PM, $40
“At age fifty-two, the saxophonist Ravi Coltrane has had time to deal with any issues of personal and artistic identity arising from his illustrious family background. It’s been a few years since he’s released an album of his own, but Coltrane’s lyrical work on “In Movement,” with Jack DeJohnette and Matthew Garrison, gained him a well-deserved Grammy nomination in 2017.” (Steve Futterman, NewYorker)

Elsewhere, but this looks worth the detour:
BRANFORD MARSALIS AND ROGER GUENVEUR SMITH
at the Prospect Park Bandshell / 7:30 p.m., FREE
“Fluid and voluble and intuitively connected, Mr. Marsalis’s longtime quartet is a down-the-center post-bop band with decades of jazz history built into its style. With Joey Calderazzo on piano, Eric Revis on bass and Justin Faulkner on drums, this group will play two sets at this show, hosted by Celebrate Brooklyn: one before a performance by Mr. Smith and the other after. In between, he will deliver his one-man play “Frederick Douglass Now,” a multidisciplinary show presenting the abolitionist’s work and philosophy with a contemporary flair.” (NYT-GIOVANNI RUSSONELLO)

American Ballet Theatre (thru July 7)
Tonight: Don Quixote
Metropolitan Opera House / 7:30PM, $22+
“The spring season nears its conclusion with a weekend of “Don Quixote,” a comic ballet showcasing the debuts of Hee Seo as Kitri and Christine Shevchenko as Mercedes on Friday, as well as Sarah Lane’s first performance as Kitri at the matinee on Saturday. The final week of repertory is devoted to Alexei Ratmansky’s “Whipped Cream,” a fanciful ballet about a youngster and his love of sweets that features a score and libretto by Richard Strauss. On Wednesday, Gabe Stone Shayer makes his New York debut as the Boy, followed, on July 5, by Arron Scott in the same role. In that performance, there’s an extra treat: Calvin Royal III makes his mark as Prince Coffee.” (NYT-Gia Kourlas )

Kronos Quartet (June 28-29)
92nd Street Y, 1395 Lexington Ave./ 8PM, $55
The inveterate explorers of Kronos share an evening uptown with Soo Yeon Lyuh, a gifted young exponent of the haegeum (the two-stringed Korean fiddle, which produces an expressively plaintive keen). Lyuh performs first, with traditional accompaniment; Kronos follows with a globe-trotting mix of African, Indian, South American, and gospel selections. They end together, in Lyuh’s haunting “Yessori (Sound from the Past).” The next day, Kronos travels to Katonah for its Caramoor Festival début, offering an eclectic grab bag of contemporary fare by Terry Riley and Steve Reich, along with arrangements of songs by Gershwin, Rhiannon Giddens, and Laurie Anderson, among others.” (Steve Smith, VillageVoice)

Paulo Szot: Salute to Broadway (June26-30)
Feinstein’s/54 Below / 7PM, $55+
“The vocally superb Brazilian baritone Paulo Szot, who made Broadway audiences swoon as Emile De Becque in the 2008 revival of South Pacific, returns to Feinstein’s/54 with a new batch of favorites from musical-theater history.” (TONY)

Fraunces Tavern Museum
“Those looking for a more historical approach to the holiday can head to the Fraunces Tavern Museum, The museum will also offer a special Dawn of Independence walking tour celebrating Lower Manhattan’s Revolutionary-era history during the holiday’s early morning hours. For those who aren’t early risers, the museum will also offer an Independence Eve walking tour covering the neighborhood’s history on June 29.”

‘THE LET GO’ (June 7-July 1)
at the Park Avenue Armory
“This large-scale, site-specific multiweek event is masterminded by the interdisciplinary artist Nick Cave, who transforms the armory into a vivid dance landscape in which spectators are invited to do just what the title says they should: let go. Within this dance hall environment are performances, an installation in the form of a Mylar sculpture, dance-based encounters and music provided by D.J.s. For some programs, Mr. Cave works with the choreographer Francesca Harper; for others, there will be dancing by community groups. On June 26, as part of “An Evening of Artistic Responses: The Let Go,” the musician Nona Hendryx, the vocalist and artist Helga Davis, Ms. Harper and Reggie (Regg Roc) Gray and his company, D.R.E.A.M. Ring, respond to the installation, which references issues of social justice, with site-specific performances.” (NYT-Gia Kourlas) 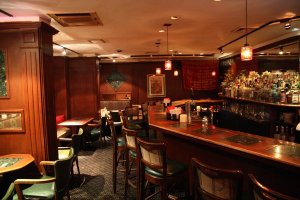